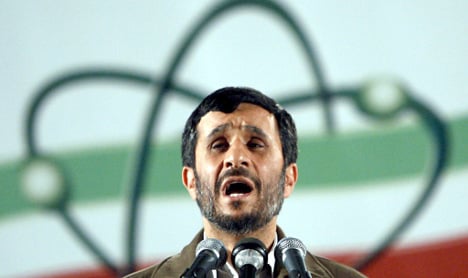 “Iran has to make concrete commitments to the IAEA (the International Atomic Energy Agency), and a concrete answer in Vienna (IAEA headquarters) is the only measure on which it can be assessed,” government spokesman Ulrich Wilhelm said.

In a bid to allay Western fears about Iran’s atomic ambitions, the IAEA has proposed that Tehran ship out its low-enriched uranium (LEU) to Russia and France to be further purified into reactor fuel.

Iran, which agreed in principle to the offer during talks with world powers in October, later appeared to reject the deal and said it preferred a gradual swap of LEU with fuel – preferably on Iranian soil.

In an interview late Tuesday, President Mahmoud Ahmadinejad said Iran would have “no problem” sending out stocks of low-enriched uranium to be further purified into reactor fuel.

German Foreign Ministry spokesman Andreas Peschke told reporters that Iran would be judged “by its actions.”

“To put this into context, we have been waiting for months for Iran to react in a committal fashion to an offer from the IAEA about enriching uranium abroad,” he said. “If Iran plans finally to respond with such a commitment, then it should do so, and where it belongs, namely the UN atomic agency in Vienna. As far as I know, this has not happened, and as long as it has not happened, we cannot

remark on the substance on the comments” by the Iranian president.

Germany is one of six world powers attempting to dissuade Iran from pursuing sensitive nuclear work.

The United States and some Western countries including Germany suspect Iran is covertly developing a nuclear weapon, a charge denied by Tehran.

Ahmadinejad’s comments came ahead of an expected meeting of the six powers on fresh sanctions against Tehran.