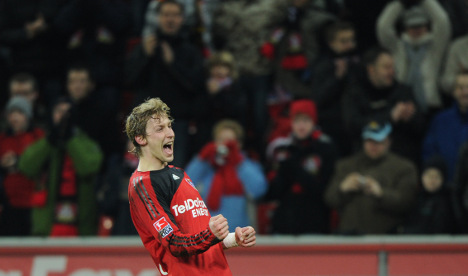 Leverkusen remains the only side unbeaten in the Bundesliga this season and stunned Freiburg with first-half goals by Germany striker Steffan Kiessling, Swiss forward Eren Derdiyok and ex-Liverpool defender Sammi Hyypia.

Although Bayern picked up their seventh consecutive league win with a 3-0 victory over Mainz on Saturday, Leverkusen went back to the top and two-points clear after Sunday’s win.

“We changed our playing style going into this game and opted to take fewer risks,” said Bayer coach Jupp Heynckes. “We had difficulties in the game’s opening stages, but if we raise the pace of the game, goals tend to follow. Freiburg played quite defensively, but we showed our morale is high by breaking them down. We want to play in Europe – that has to be our aim.”

Germany squad member Kiessling remains the league’s top scorer after he bagged his 13th goal of the season on 36 minutes with a well-taken header.

Then Derdiyok capitalised on a mistake in the Freiburg defence just 60 seconds later for his eighth league goal of the season.

Hyypia ensured the win with his second goal in two games with a header past Freiburg goalkeeper Simon Pouplin five minutes before the half-time whistle.

Defender Felix Bastians pulled a consolation goal back for Freiburg, but the defeat leaves them 15th in the table, just one off the relegation zone.

In another game, Stuttgart coach Christian Gross picked up his fourth straight win and remains undefeated after seven games in charge as his side enjoyed a 4-1 win over Borussia Dortmund.

The result means the home side has now claimed 12 points from their last four league games with Spanish giants Barcelona beckoning in the Champions League last 16 clash on February 23.

Schalke 04 is third after their 2-0 win over Hoffenheim on Saturday with goals by striker Kevin Kuranyi and midfielder Lukas Schmitz while the defeat leaves Hoffenheim ninth in the table.

Dutch winger Arjen Robben, Germany striker Mario Gomez and defender Daniel van Buyten all scored in Bayern’s win over Mainz in snowy conditions, leaving their team second at the end of the weekend.

Elsewhere, Werder Bremen coach Thomas Schaaf is in a precarious position as his side has now gone seven German league games without a win after they went down 4-3 at midtable Borussia Mönchengladbach.

Second from bottom Nuremberg picked up only its second win in the last 10 games with a 3-1 at Hannover. The result leaves bottom side Hertha Berlin five points adrift after a scoreless draw with Bochum in the capital.

Cologne is up to 13th after its second consecutive win, having beaten Eintracht Frankfurt 2-1.