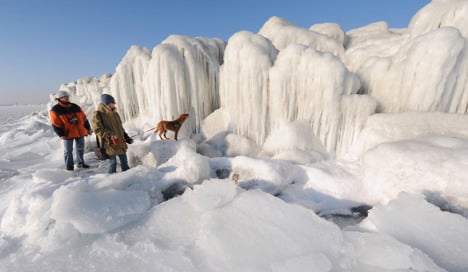 At least 14 homeless people have died of exposure to the brutal cold this winter, according to an advocacy group. The BAG aid organisation said it had not seen such a catastrophic winter since 25 homeless died in 1996-1997.

Weather service Meteomedia reported unusually frigid temperatures in the states of Mecklenburg-Western Pomerania and Brandenburg, registering -21.3 degrees in Ueckermünde and -21 degrees Goldberg. The last years to see temperatures so low were 2006.

Snow and freezing temperatures significantly delayed train traffic on Tuesday in Lower Saxony and Bremen due to frozen junction plates on tracks, a spokesperson for national rail provider Deutsche Bahn said. High speed ICE trains were also cancelled because cars couldn’t be attached due to the extreme temperatures.

Meanwhile dozens of flights at the Munich Airport were cancelled due to heavy snowfall despite non-stop cleanup efforts, a spokesperson said. Snowfall also forced 17 flight delays at the Frankfurt Airport.

Though icebreakers were also out in force, shipping traffic along rivers and canals remained hindered by ice and harbours faced heavy financial losses for their failure to deliver.

Police reported countless accidents due to slippery roads, and workers for the ADAC automobile club said they were overwhelmed with calls to assist with dead car batteries, frozen doors and cracked radiators.

“Right now we have everything outside that has wheels and legs,” an ADAC spokesperson in Hamburg said.

Hospitals there also reported double their normal traffic for broken bones, concussions and contusions thanks to winter weather accidents.

Even wildlife are struggling to survive as the frost persists. A frozen snow crust in many places prevents deer and other animals from finding food, the LJVB hunting association for Brandenburg reported, calling the situation an “emergency” for the animals.

But weather reports do not predict a respite for wildlife, drivers, or emergency workers in the next few days. A low-pressure storm from Scandinavia will bring negative temperatures, high winds, more than five centimetres of snow and freezing rain to northern Germany beginning on Tuesday night, the German Weather Service reported.

Snow will continue in southern Germany through Wednesday and by Thursday up to 20 centimetres of snow may be on the ground.

More of the white stuff can be expected across the country on Thursday and Friday to, the DWD said, with heaviest accumulation in mountainous regions.