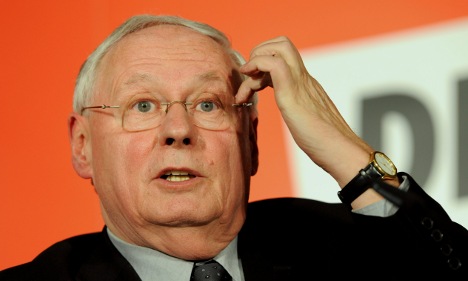 As wrangling began to find new leadership, Ramelow told daily Ruhr Nachrichten that he was in favour of keeping the party’s dual-leader structure, and said one of their female talents should join co-chairman Lothar Bisky now that Lafontaine will be giving up his seat.

“We need a strong woman and a strong man in leadership,” he told the paper. “Both east and west should also be represented there. That would be the right line-up.”

“Women from the East, who would be excellently suited,” he said.

But after news of Ramelow’s picks broke on Monday, Enkelmann and Pau said they weren’t interested in the post.

Pau told broadcaster MDR that she was already busy with her current duties.

“I won’t campaign for a party position,” she said, adding that internal party bickering over post was making a bad impression.

“We shouldn’t hold a personnel debate until May, but also mix in politically,” she said.

Meanwhile Enkelmann said she had personally ruled out the option, but agreed with Ramelow’s premise.

“I am among those who say clearly: Yes to a dual leadership, male-female, east-west,” she told Deutschlandradio Kultur.

On Saturday sources said that 66-year-old Lafontaine, who underwent cancer surgery last year, would give up his leadership position and his Bundestag seat.

The information emerged on the sidelines of a meeting of The Left’s leadership in Berlin, the first at which Lafontaine has been present since his operation in November for prostate cancer. Speculation has been rife for weeks over Lafontaine’s political future.

Lafontaine, who is from the state of Saarland, said he will not campaign for another term as leader at the party’s conference in May. It signals the end of one of the most remarkable and controversial political careers in German politics.

Once the leader of the centre-left Social Democrats (SPD), Lafontaine took the helm of the hard-line socialist Left party in 2007 after it was formed by disgruntled western German trade unionists and members of the successor to the East German communist party.

He has been instrumental in helping the socialists establish themselves in western Germany, but his methods have irked many easterners.

In the wake of Lafontaine’s illness, a leadership fight broken out between different camps of the party – the so-called “realists” and the “fundamentalists.” Lafontaine is considered a member of the latter group, which focuses on being a vocal voice of the opposition.

The realists, many of whom are in eastern Germany, have been more interested in compromise and entering state governing coalitions with the Social Democrats.