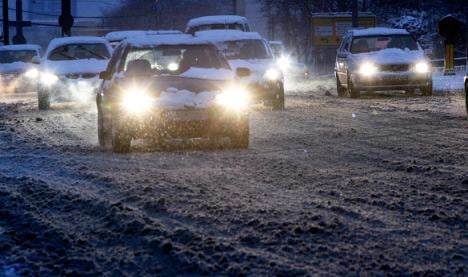 The central German state of Hesse was particularly hard hit by the nasty weather, as treacherous driving conditions led to scores of accidents. A truck driver died near Kassel on the B80 after sliding into a tree, which caused his vehicle to burst into flames. The icy weather also created traffic jams on the A3 and A5 motorways up to 30 kilometres long heading towards Frankfurt.

Frankfurt Airport was forced to cancel 65 flights on Monday morning, according to an airport spokesman. He said there were already delays of at least an hour due to restricted landing capacity, but snow this afternoon could aggravate the situation.

Heavy snow in Lower Franconia was responsible for at least 100 traffic accidents, the police said on Monday. However, major roads in the region were expected to remain open.

Germany is to remain bitterly cold this week as powerful high-pressure system “Dirk” blows icy air into the country from northeastern Europe, the German Weather Service (DWD) reported on Monday.

Overnight low temperatures will dip to -18 degrees Celsius in some parts of the country as the work week begins. Snow may fall in eastern Germany, along with a few flakes south of the Danube River, but northern Germany will stay dry and chilly.

On Tuesday, the clouds will clear enough to allow the shy sun to peek through in the north, but central and southern Germany will see heavy snowfall. Meanwhile permafrost will set in with temperatures between 0 and -8 degrees.

The long winter continues on Wednesday, though with a bit more sunshine, the DWD said from its headquarters in Offenbach. As the day progresses, however, more clouds will spread to the south, while snow is expected in the north. High temperatures will remain between a chilly 3 and -7 degrees.