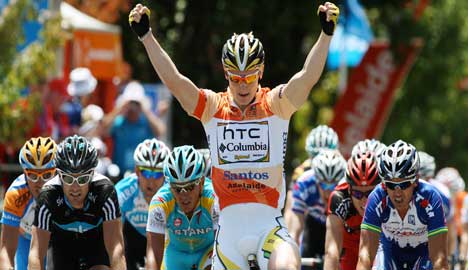 “I’m really happy, and for the team as well,” Greipel said. “The team did a really good job the last week. I’m just really happy.”

American cycling legend Lance Armstrong, who is building towards this year’s Tour de France, started the day 47 seconds adrift and did not finish among the leaders.

Greipel, 27, bombed out of last year’s race when as defending champion, he ploughed into a parked police motorbike and spent four months out with shoulder surgery.

He has dominated this week, claiming the first two stages with trademark sprint finishes and then eclipsing an Armstrong attack with another powerful dash on day four.

The six-stage Tour Down Under, raced over 800 kilometres (500 miles) of road around Adelaide, has grown into one of Australia’s biggest sporting events attracting hundreds of thousands of fans.