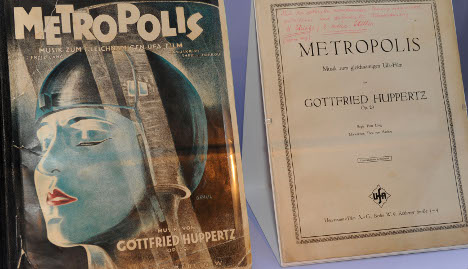 “The Complete Metropolis” will be held at the Deutsche Kinemathek museum for film and television at Potsdamer Platz, where many of the Berlinale red carpet events take place.

“It will be sort of a Making Of,” said curator Kristina Jaspers.

Cinemaphiles can glimpse the 30 minutes of extra footage found in an Argentinean archive in 2008, some 200 set photos, as well as pieces of the city set itself, many of which were built in Berlin’s Babelsberg film studio. Also on display will be the film’s screenplay and original music score.

“Metropolis” depicts a dystopian, futuristic city full of skyscrapers and airplanes divided into two worlds. Above ground the rich live in luxury, while subterranean workers toil to serve the upper class. It has been credited with inspiring George Lucas’s C-3PO from the “Star Wars” films and the set from Ridley Scott’s “Bladerunner.”

When the 1927 science fiction film directed by Fritz Lang was completed, it was the most expensive film ever made, costing some 7 million Reichsmarks and including the work of thousands of people. Despite its colossal scale, the film was considered a flop and cut drastically before being released in the US.

It premieres at a gala Berlinale event that will also be beamed onto screens at the Brandenburg gate for the public on February 12.