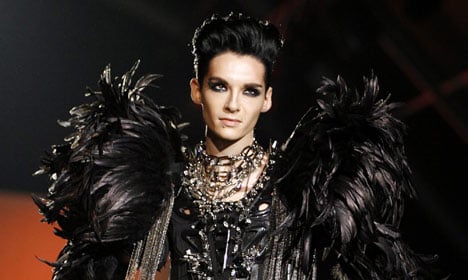 “It was my first time on the catwalk and I was really nervous,” Kaulitz said after opening the show for Canadian brand DSquared2 as part of Milan fashion week for winter 2010/2011 on Tuesday.

Click here to see Bill take his turn on the catwalk.

But his stage fright didn’t stop the Italian media from gushing over the gender-bending German heartthrob’s performance and dubbing the 20-year-old a “black angel.”

Kaulitz’s twin and bandmate Tom sat in the front row at the show to cheer on his brother, who was sporting a new hairdo that was much more streamlined that his usual spiky look.

The appearance may be just the beginning for the ambitious young singer’s fashion career. He reportedly told men’s magazine GQ that he could imagine designing his own fashion collection.

The Kaulitz twins started Tokio Hotel in Magdeburg along with Georg Listing and Gustav Schäfer, bursting onto the music scene with their first album “Schrei” (Scream) in May 2006. It sold some 600,000 copies in its first week and went on to become a major success in France, Austria and Switzerland. The band’s first US single was released in late 2007.