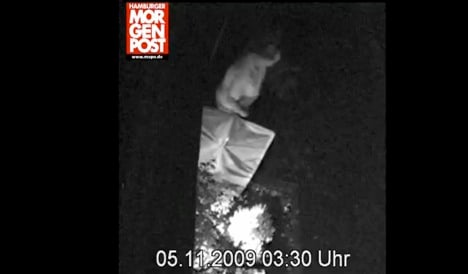 Photo: A screenshot of the video of the 'terror-pisser'.

A years-long feud between the two families could now be finished, after the weed-upon couple confronted their urinating neighbour – dubbed the “terror-pisser” – with video evidence of his night-time activities.

The Hamburger Morgenpost newspaper reported that Dieter and Rosemarie Friebel, who live in the Farmsen area of the city, had problems with plants in their front garden for years.

“A hibiscus suddenly looked like it had been burned by the sun,” said Mrs Friebel. She kept buying and planting new plants, but they too soon succumbed to what she started to suspect was poisoned soil.

She told the paper she even took a soil sample, intending to send it off for testing, but decided against it after discovering how expensive it would be.

The Friebels said they had long had problems with the family next door, particularly with excessive noise. A year ago Mrs Friebel saw the man, named only as Peter M., hit another car while parking his, and was called as a witness in a court case.

“Since then he has not spoken to us at all,” she told the paper.

The problems with her plants continued to be a mystery until she found a CD in the post.

“One day we found a CD in our post box. A neighbour must have given it to us,” said Mr Friebel. “When we played it, we could not believe our eyes.”

The paper said there were 12 short films, taken between October 28 and December 5 – all showing Peter M. leaving his house at night and urinating over their front garden.

They confronted him with the evidence and he has apologised.

“It makes me feel sick when I think how often I ran my fingers over the leaves and wondered where the liquid came from,” said Mrs Freibel.