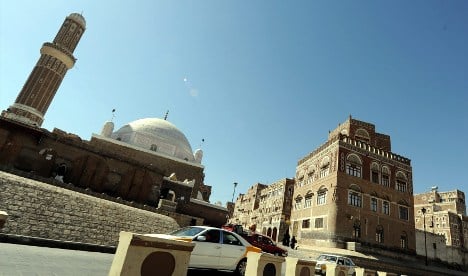 Westerwelle conducted talks with President Ali Abdallah Saleh to sound out ways to help the country, which is one of the poorest in the Middle East. Also on the agenda was the fate of five Germans, including three children, and a British national who have been held by kidnappers in Yemen since mid-June.

Westerwelle told reporters that Saleh had told him during their talks that he had recent information about their whereabouts. The family from Saxony has not been seen since they were abducted along with four other foreigners in the country’s Saada province. Authorities there believe that the kidnappers may be Shiite rebels from the mountainous region near the Saudi border who are working with Al-Qaida.

Three of the hostages – two German women and a South Korean woman – were found murdered by Yemeni authorities three days after they were captured. Foreigners are often kidnapped in Yemen by tribesmen to be used as bargaining chips in disputes with the government. More than 200 foreigners have been abducted over the past 15 years.

The German minister said he had thanked the Yemeni government “for their efforts to see our hostages released.” Westerwelle also said the German embassy was doing everything it could to bring the “intolerable situation” of the German hostages in Yemen “to a good end.”

According to diplomatic sources, Westerwelle wants to gain a first-hand picture of the situation there due to concerns that further destabilisation could lead to negative effects across the region. The visit to Yemen follows stops in Saudi Arabia, the United Arab Emirates and Qatar, during which Westerwelle called for a united fight against terrorism.

“Based on his talks in the Gulf, Westerwelle made the quick decision to go to Yemen to get the feeling of the situation on the ground,” a member of his delegation said.

Westerwelle is the first European minister in Sanaa since the Yemeni branch of Al-Qaida claimed responsibility for the failed bombing of a US airliner on Christmas Day. The suspect in the case, 23-year-old Umar Farouk Abdulmutallab, was allegedly trained at a terrorist camp there.

The incident put the impoverished country into the spotlight and both London and Washington have announced plans to fund counter-extremism police. But US President Barack Obama said in comments published on Sunday that he has “no intention” of sending American troops to Yemen.

Recent strikes on Al-Qaida positions in Yemen, including cruise missile attacks, were however reportedly led by the United States, which has vowed to boost its economic and military aid to Sanaa.

Yemen has been hostile to any suggestion of US military intervention, but analysts fear Osama bin Laden’s ancestral homeland cannot tackle the militants on its own.

Saleh said on Sunday he is open to dialogue with Al-Qaida militants, indicating he may show a measure of leniency to the jihadists, whom analysts say he does not view as the main threat to his shrinking power base.

“If Al-Qaida lay down their arms, renounce violence and terrorism and return to wisdom, we are prepared to deal with them,” Saleh told Abu Dhabi TV.

With a Shiite rebellion in the north and a movement for autonomy in the south, the central government asserts little control over the country, which is also reeling from an economic crisis aggravated by dwindling oil reserves and a water shortage.

Germany is by far the biggest European contributor of development aid to Yemen, with some €79 million earmarked for 2010-2011.

The German official said Westerwelle would also “press for good governance” and raise the issue of widespread corruption in Yemen while also calling for a national dialogue to resolve internal strife as a means to restore stability.

The Yemeni government has turned to the energy-rich Gulf Cooperation Council (GCC) states and the international community for help, but aid has been slow to arrive.