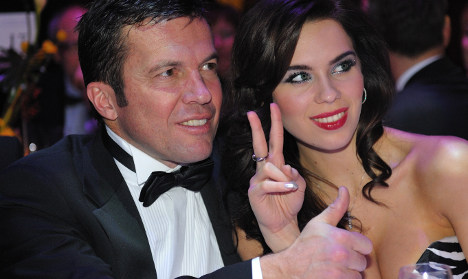 Will that be a table for two or just one? Photo: DPA

“I don’t like the word divorce, but I am going to seek counsel,” said 1990 World Cup star Matthaus. “I have the impression Liliana is subject to some bad advice,” added the former Bayern Munich and Inter Milan star.

One-time model Liliana, 22, met Matthäus at Munich’s Oktoberfest beer festival in 2007 and the pair quickly became a couple. But she left the family home early last month while insisting nobody else was involved.

“Sunday evening she came to see me saying she still loved me and that she missed me but that she needed time to think,” said Matthäus, who tied the knot with Liliana on New Year’s Day last year in Las Vegas.

Matthäus, who has yet to shine as a football coach, has not shied from airing colourful personal life in public and his amorous travails have been eagerly devoured by the German media.