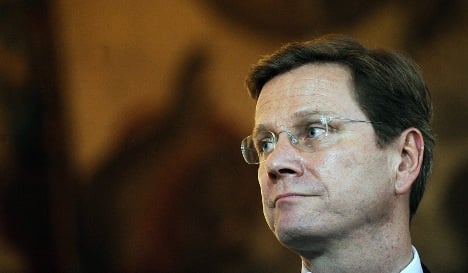 Westerwelle will embark on the trip Wednesday in Turkey for talks with his counterpart Ahmet Davutoglu and European Affairs Minister Egemen Bagis, ministry spokesman Andreas Peschke said on Monday.

The minister, the leader of the pro-business Free Democrats who became foreign minister and vice-chancellor in November, will also likely meet President Abdullah Gul and Prime Minister Recep Tayyip Erdogan.

“The issues will include the items on the extensive bilateral and international agenda that we have with Turkey,” Peschke told a regular government news conference.

Chancellor Angela Merkel’s centre-right government is sceptical about Ankara’s bid to join the European Union and would prefer it to be granted a “privileged partnership” with the bloc.

He will go on to Riyadh for talks with Saudi Foreign Minister Prince Saud al-Faisal and other members of the government, followed by meetings in Doha with his Qatari counterpart, Sheikh Hamad bin Jassim bin Jabor al-Thani, and the emir, Sheikh Hamad bin Khalifa al-Thani.

“In the Arabian Peninsula, the issues will also include the situation in Middle East, the state of the peace process and how we can manage, together with our partners in the region, to bring about a new start in the Middle East peace process,” Peschke said.

He added that the subjects of Iran, Afghanistan and Yemen would also figure on the agenda.

Germany has tightened its security at its embassy in Yemen due to fears of strikes by an Al-Qaeda branch linked to a botched attack on a US airliner last month.

The US, British and French missions in Sanaa have shut for security reasons.