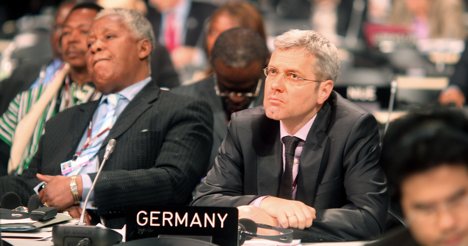 In a new interview with news magazine Der Spiegel, German Environment Minister Norbert Röttgen laid the blame for the failure of the Copenhagen climate conference at the feet of the USA and China.

Röttgen said that US President Barack Obama and Chinese Prime Minister Wen Jiabao had “agreed to the lowest common denominator. China didn’t want to lead and the USA couldn’t lead.”

The lowpoint of the negotiations came, according to Röttgen, when China refused to accept a pledge by industrialised nations to reduce CO2 emissions by 80 percent by 2050. In Röttgen’s opinion, China’s priority was clearly not protecting the climate, but “obstruction.”

Röttgen added that the political elites in the USA were incapable of winning over the majority of the people to protect the climate. Too many Americans simply want “cheap money, so they can consume, and are not interested in limiting their CO2 emissions.”

Röttgen also refused to consider the suggestion of Hans-Peter Keitel, president of the Federation of German Industries (BDI), to lower Germany’s domestic target of decreasing emissions by 40 percent by 2020.

“This target is a condition for our prosperity,” the environment minister said, pointing to Germany’s success in exporting new clean energy and environmental technologies. “We shouldn’t send the money abroad to buy oil. We should use German engineering to create jobs at home.”

Despite the failure of the Copenhagen summit, the German government is considering increasing its climate protection support for poor countries. “We should not refuse help to those states that are seriously trying to reduce their greenhouse gas emissions,” said Development Minister Dirk Niebel in the latest edition of news magazine Focus.

In Copenhagen, Germany agreed to offer €1.26 billion from 2010 to 2012 to help develop climate protection in poor countries. “This offer is still valid,” Niebel said, though details are still to be negotiated.