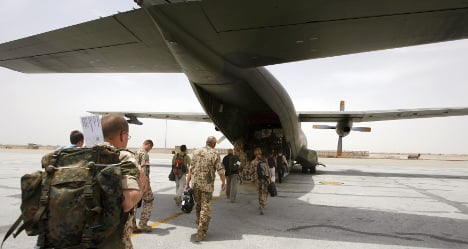 SPD chairman Gabriel told the Bild am Sonntag newspaper that the party would “not give its support to additional combat troops beyond the current ceiling.”

There was “already an imbalance between combat troops and civil reconstruction workers,” he said, adding there should be more of the latter and rejecting suggestions Germany’s army, the Bundeswehr, should get tougher militarily.

“Whoever is demanding a ‘more robust mandate for a combat operation’ wants the emphasis of the Bundeswehr mission to shift towards greater military violence and more dead on all sides,” he said.

The United States and NATO are calling on Germany to boost its current troop ceiling of 4,500, though Chancellor Angela Merkel has refused to commit to an increase before an international conference on Afghanistan to be held in January.

Meanwhile, SPD parliamentary leader Thomas Oppermann said the “serious crisis of confidence” stemming from the Kunduz affair could even throw into doubt his party’s support for all future foreign deployments of German soldiers.

He told the Neue Osnabrücker Zeitung: “The Bundestag must be able to count on getting precise and comprehensive information from the government. There is significant doubt about that.”

Together, the SPD leaders’ tough line on deployments constitute a major shift in what has been an effective bipartisanship on Afghanistan between them and their main conservative rivals, Merkel’s Christian Democratic Union.

The German-ordered airstrike on two stranded tankers on September 4 killed at least 142 people, including an unknown number of civilians. The then Defence Minister Franz Josef Jung, the army chief Wolfgang Schneiderhan and a senior defence bureaucrat all resigned over the affair after it emerged the government had knowingly misled the public by claiming no civilians had been killed.

Current Defence Minister Karl-Theodor zu Guttenberg is also under close scrutiny over possible discrepancies between what he knew after taking over the portfolio and what he told the public.

Germany’s lower house, the Bundestag, will begin an inquiry into the affair in January.

SPD general secretary Andrea Nahles told broadcaster Deutschlandradio Kultur on Saturday that Merkel had to make it clearer to the parliament what exactly was expected of the German army in Afghanistan.

Lately, Merkel and her government have come under attack for the cloudy rules of engagement under which German troops are operating.