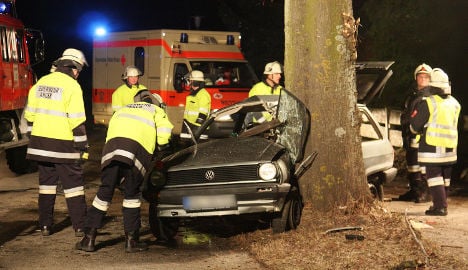 In 2008, there were 95 tree collision accidents per 1,000 kilometres of road in the state, the Auto Club Europa (ACE) study said after reviewing information from the Federal Statistics Office (Destatis).

But not all German drivers have such sylvan tendencies, the study said. Though there were some 25,000 car accidents with trees in 2008, this number is half that of reports in 1995. The ACE said that this does not mean that German drivers should give up being cautious, though, as some 20,000 people have died in tree accidents since that year.

The most dangerous roads for such accidents are in rural areas. To prevent accidents the ACE encouraged states to enact no-passing zones, reduce speed limits, put up protective barriers and plant new trees at least nine metres from roads.