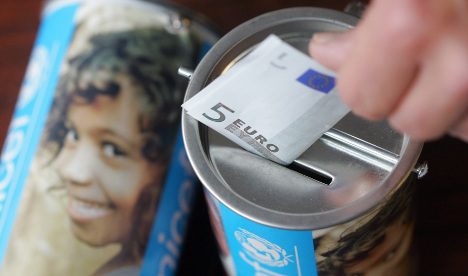 “More than every other donated euro comes from those older than 60,” said Ulrich Pohl, who is a pastor and head of the Bethel Institute, a religious social welfare organisation that claims to be the largest of its kind in Europe.

About 75 percent of the money donated in Germany goes to humanitarian causes, Pohl said, adding that donations this year have remained steady despite the bad economy.

“The donation revenues are surprisingly stable,” he said, adding that the winter holidays are the most important time of year for charitable organisations, which collect up to 60 percent of their funding in just a few weeks.

But those who give money to a good cause are increasingly demanding to know exactly how it is spent.

“They want to know, ‘How much of my money actually arrives?’” he said, adding that many donors demand to know how their funds are divided between business concerns such as advertising and administration.

Pohl also criticised the lack of donation collection laws in some German states, particularly considering that there are some 40,000 charitable organisations in the country.

Potential philanthropists can consult the Deutsche Spendenrat and the DZI institute for social questions, but they should also look for certain signs of authenticity to avoid being swindled.

“Is the collection vessel sealed? Does the donation collector have an identification card where there is a telephone number for inquiries? If someone comes to the door collecting donations and also wants to sell newspaper subscriptions, I would be extremely sceptical,” Pohl said.

The internet can help with finding appropriate organisations to support, he said, recommending portals such as Better Place, HelpDirect or iDo – which link to blogs and other information from organisations to increase transparency.

“Considering that most donors are older, most of these portals are perhaps an opportunity to reach younger people,” he added.