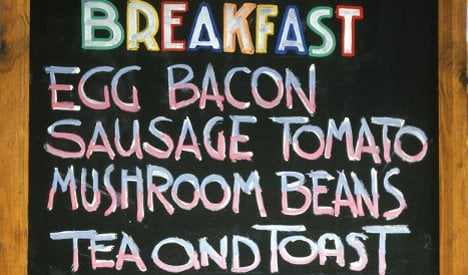 Germany is governed by ritual, as strange and as rigid as those in Japan. However, instead of the oriental tea-ceremony, the Germans have the “Second Breakfast.” Usually this is an elegantly packed, lovingly unpacked Leberwurstbrot, which must be consumed between 9:30 and 10 am.

The other day I went to the bakers for a cup of coffee and found that I had to balance my cup and my Fleischsalat (only Germans could come up with something called “meat salad” to put on your toast) on the very edge of a table because the place was full of orange-glowing rubbish collectors, carpenters and gardeners. A bus driver popped by and so did the policemen who should have been keeping an eye on the local Jewish memorial.

“Aha,” said one customer, “you celebrate Bergfest too?” Mountains give me nightmares – I have long argued for making Bavaria flat – so I didn’t understand the reference. Apparently the Bergfest, and my apologies to readers who have always known this, is celebrated at 12 o’clock on Wednesday because it is the summit of the working week. From then on, it is all downhill towards the well-deserved weekend.

Fine, I thought, I have learned something new. But the next day, while walking the dog, I noticed that all my fellow workweek mountaineers were sitting in their trucks eating Leberwurst on bread at precisely 9:30 am. It was like that irritating television advertisement for that midmorning snack Knoppers: “Mornings at half past nine in Germany!” It’s almost as if the stomachs of the whole German population have been programmed to rumble since their first Pausenbrot at school. How many calories does a German labourer need? How many Puddingbretzel have to be consumed before he can successfully check your tyre pressure or fix your sink? How many hours does he spend actually working?

There are even regional takes on this second breakfast culture. In Plattdeutsch, or Low German, it’s called Fofftein. We can deduce from the word that the North German spends no more than fifteen minutes on his Brotzeit. The Berliner, according to my investigations, takes 45 minutes. Perhaps a certain Bundesbank director could do the appropriate calculation to see how much time is crumbling away every month. Germany seems convinced that it has made the giant leap into a service society – shopping until 9 pm on Fridays! But it is still held back by archaic routines such as this second breakfast. Or have you ever tried to ring a plumber at 10:15 a.m.?

The answer – obviously – is to introduce the Anglo-Saxon model. The priority of Chancellor Angela Merkel’s new government has to be to persuade the nation to eat the full English breakfast every morning. Scrambled or fried egg, baked beans, grilled tomato, two sausages, mushrooms, fried bread. Tea with milk. Cornflakes or porridge. The resulting boost in productivity should put Germany firmly on the path to growth.

Now, you don’t have to be a top dietician to work out the problem with the English breakfast. It was devised in the Industrial Revolution to give workers the 3,000 calories they needed to dig in the coal mines; by four o’clock, they had burned up the energy and were ready for teatime. But you don’t burn 3,000 calories by working in a call centre. So, there is the risk of getting fat. Not, though, if you use high quality ingredients and eat in moderation. In that case, the breakfast can do you nothing but good. Organic eggs, home-made bread, grilled bio-tomatoes, meaty tight-skinned sausages.

Britain is full of happy octogenarians who have eaten the bacon-and-egg breakfast all their lives, all fitter than I am. Germans should convert now to get the nation’s proverbial intestines chugging. Who knows – maybe soon you will be able to get your washing machine fixed in the Fatherland at 9:30 am.