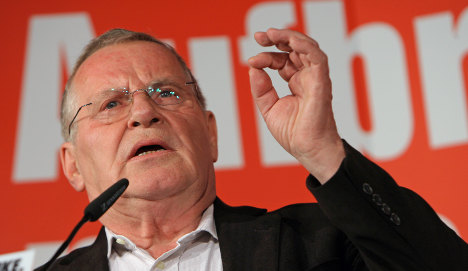 Bisky said it was time to talk openly of what he called ‘common roots’ of the two parties, and to take up the proposition made recently by Brandenburg’s SPD state premier Matthias Platzeck for reconciliation.

“This is perhaps a project for the next generation,” Bisky told Der Spiegel magazine.

But he said such a move would require his party to, “Admit historical mistakes, such as the subjugation of social democracy in the GDR.”

Platzeck “deserves a positive answer,” said Bisky, and said that reconciliation of the SPD and Left would be, “In the interests of future generations.”

Platzeck leads a state government formed of his own SPD and the Left, which has unsettled those in the SPD concerned about scaring voters who feel the Left is still contaminated by the past of many of its members.

The Left is a coalition of trade unionists, disaffected SPD supporters, and a significant section from the PDS, the successor party to the SED, which had ruled East Germany, many of whom had unsavoury links to the secret police, the Stasi.

The Brandenburg parliament was the scene of two resignations last week when its vice president Gerlinde Stobrawa and regional deputy Renate Adolph left their jobs after being accused of not coming clean over their Stasi pasts.

The last GDR foreign minister and co-founder of the SPD in the east, Markus Meckel said he was not surprised by the scandal, saying, “It was always known that there was a pile of such people in the former PDS – not just in Brandenburg, but all over the east.”

In an interview with the magazine Super Illu Meckel said the party had never seriously dealt with the crimes of the Stasi but had simply offered such people a new political home.

He said Platzeck’s idea of building a coalition between the SPD and the Left as some kind of reconciliation project was a mistake.