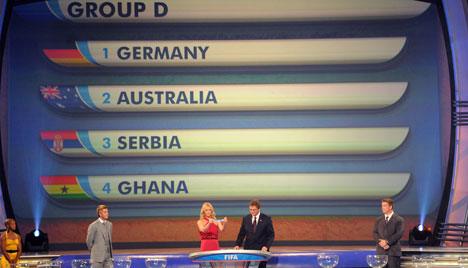 Germany will open their 2010 campaign in Group D against Australia in Durban on June 13, then play Serbia in Port Elizabeth on June 19 before the pool stage final game against Ghana at Johannesburg’s Soccer City on June 23.

But Bierhoff was happy to have avoided danger sides France and Portugal who qualified through the play-offs and could potentially have landed in the same group as the Germans.

“We are glad we did not draw France or Portugal, but Australia, Serbia and Ghana will also not be easy,” admitted former Germany striker Bierhoff.

Germany have never been beaten by any of their three World Cup opponents in previous meetings, but will be most concerned about Australia who reached the last 16 at the 2006 World Cup. It took a penalty deep into injury-time for Italy to overcome the Socceroos in Germany and continue their run to the crown.

Germany were also given a scare when they beat Australia 4-3 in the Confederations Cup in 2005 on their last meeting when a late Lukas Podolski goal proved to be the winner.

And Germany also won the 1974 World Cup group stage clash against Australia 3-0 in Hamburg on their way to winning the world crown.

African side Ghana were beaten 6-1 by the Germans in a friendly in 1993 and Germany had to come from behind to be seal a 2-1 victory against Serbia in a pre-Euro 2008 friendly.

“We are quite happy with this draw, it’s an interesting group,” said coach Joachim Löw. “We already started a tournament against Australia when we played at the 2005 Confederations Cup and we had some difficulties against them.”

He also said he did not underestimate Serbia’s technical prowess, which allowed them to dominated their qualification group.

“As for Ghana, for me they are one of the best teams out of Africa along with the Ivory Coast and Algeria,” Löw said. “Now we can focus on getting our preparations right ahead of the first game on June 13.”

The draw means Germany could potentially meet Group C favourites England in the first knock-out phase and Löw was enthusiastic about the prospect of facing their archrivals.

“England in the knock-out phase would be a great game for us, without question,” said Löw.