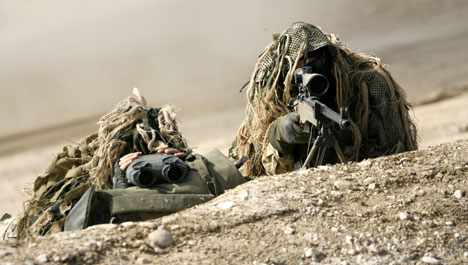 The Bundestag lower house voted 445 deputies out of 594 in favour of the motion, which will ensure that German troops stay in the strife-wracked country until at least December 2010.

Germany is currently the third-biggest supplier of foreign troops in the country behind the United States and Britain.

The US special Representative for Afghanistan and Pakistan Richard Holbrooke said earlier on Thursday the United States does not plan to pressure Germany into sending more troops to Afghanistan.

“The Bundeswehr has already lost more than 30 soldiers in Afghanistan – that is historic,” the diplomat told financial daily Handelsblatt.

His comments came one day after German media reported the US was hoping for up to another 2,500 Bundeswehr troops for the NATO mission following President Barack Obama’s announcement that he would be sending 30,000 more American troops to the region.

However, Chancellor Angela Merkel said on Tuesday she would not decide increasing troops until after a January 28 international conference on the situation in Afghanistan.

“After this conference on Afghanistan, Germany will decide whether or not it will make fresh efforts, and if so, what efforts,” Merkel said, adding that security problems in Afghanistan would not be solved by military means alone.

“It remains up to the Germans themselves to decide on the next action,” he said.

Holbrooke added that he expected only political agreements and not troop numbers to be exchanged at a meeting of NATO-member foreign ministers in Brussels on Friday, though he emphasised that the situation is serious.

The German parliament is set to approve extending its troop mandate in Afghanistan for another year on Thursday. Some 4,400 Bundeswehr soldiers are currently serving in Afghanistan, where German troops are engaged in the heaviest fighting since World War II.