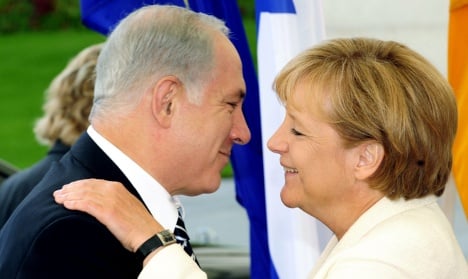 Chancellor Angela Merkel and Israeli Prime Minister Benjamin Netanjahu will also visit a memorial to murdered Jews in Europe, an estimated 6 million of whom died in the Holocaust carried out by the Nazis during World War II.

According to Israeli radio reports on Sunday, Netanjahu plans to discuss with Merkel the danger of Iran’s nuclear program and the stalled Middle East peace process – a subject likely to involve the sensitive issue of Israeli settlements in the occupied West Bank.

On his first trip to Israel last week, Foreign Minister Guido Westerwelle called on both Israelis and Palestinians to resume peace negotiations.

Germany has also been involved in talks to free the Israeli soldier, Gilad Schalit, who was snatched by Palestinians in 2006 as a hostage. Netanjahu planned to thank Germany for its role in mediating a prisoner-swap, Israeli radio reported.

The cabinets would discuss the economy, the environment and scientific research. They were also expected to discuss co-operating on African development aid.

Netanjahu was to be accompanied by six ministers, including Foreign Minister Avigdor Lieberman and Defence Minister Ehud Barak.

Last year, German ministers travelled to Israel for a similar joint cabinet meeting, at which they signed an agreement to intensify military, political, cultural and economic co-operation.