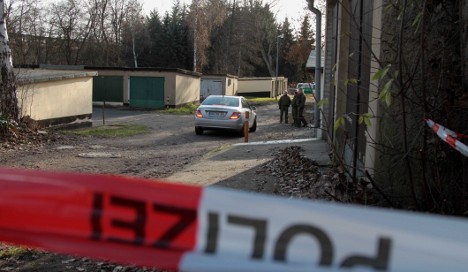 The 46-year-old’s wife discovered him dead in his garage unit at the storage complex “Friedenseck” in Lauchhammer near Cottbus on Monday evening at 8:45 pm.

“The deceased exhibited stab wounds and evidence at the scene indicates that there was a fierce battle before his death,” the Interior Ministry said in a statement.

The officer was not on duty nor was he wearing a uniform at the time of his death.

Motives for the murder remain unclear and police have launched a manhunt in a search for the perpetrator, ministry spokesperson Peter Salendar told The Local.

“More than 50 officers are working on the case,” he said. “No witnesses have contacted police, therefore we have released a call for them to come forward.”

On Tuesday afternoon, investigators located the officer’s silver Opel Vectra car some 20 kilometres from the crime scene. They believe it was abandoned after being used as a getaway vehicle.

Anyone who saw such a car bearing the license plate OSL-B 154 near Lauchhammer on Monday evening is requested to contact police at any precinct.

Meanwhile the German government on Tuesday coincidentally called for harsher punishment for those who attack police officers, who are supposedly increasingly becoming the target of brutally violence.

According to the paper there were some 28,000 cases of violence against public officials – an increase of 5,000 from six years earlier in 2002.

While there is no minimum sentence for violence against officers, the maximum sentence is two years, Bosbach told broadcast N-TV, calling this a “political paradox.”

“If I destroy a police cruiser then I’m threatened with up to five years,” he explained. “We are dealing with disappearance of inhibitions that we’ve never had in the past.”