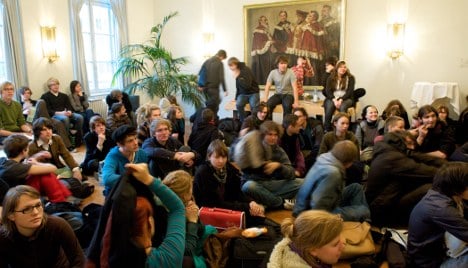 The protest will continue student action that has been going on for weeks at universities across the country.

Student leaders from the University of Leipzig have accused the rectors, or leaders of the state universities, of not acting in student interests.

“I can understand if the students are worried about the terms of their studies and also when they protest,” she said. “But my impression right now is that there are few concrete demands, and instead an overall unhappiness with the situation. That worries me.”

Protesters have said they are angry about changes that are part of the Bologna process, meant to bring standardised bachelor’s and master’s programmes to European universities. They are also opposed to the introduction of modest tuition fees and what many consider the chronic underfunding of education in Germany.

Protesting students also complain some institutions have failed to adapt programmes to the shortened period of time required to complete a degree. Others say that there are not enough entrance spots available to those wishing to enrol at universities in Germany.

On Monday 100 students occupied a lecture hall at the University of Leipzig where the HRK is meeting. Meanwhile last week more than 85,000 students took to the streets in Munich, Berlin, Freiburg, Cologne and at lecture halls in smaller university communities. The demonstrations are expected to continue into December.