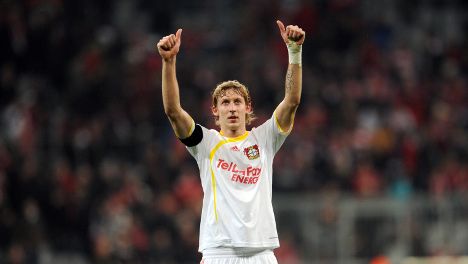 The single point allows Leverkusen to regain top spot from temporary leaders Werder Bremen who hammered Freiburg 6-0 on Saturday, while Bayern is now seventh in the table.

“If we had had more confidence in ourselves, we could have played to win,” said a disappointed Kiessling. “In the second half, we were too focused on defending and we didn’t produce as much up front as we had done in the first-half. It is not easy to play against (Bayern defenders Daniel) Van Buyten and (Martin) Demichelis, but I think I did well.”

Kiessling made his first appearance for Germany in nine months in last Wednesday’s 2-2 draw with the Ivory Coast.

His goal against Bayern Munich was his third in as many league games.

Van Gaal kept virtually the same starting line-up which drew 1-1 with Schalke in their last league game, the only change being Italian striker Luca Toni, who was left out of the squad for disciplinary reasons.

With Toni in the stands, van Gaal partnered Mario Gomez with Miroslav Klose up front. Klose was back after being quarantined when his twin sons contracted swine flu ten days ago, but proved himself to be in top form by setting up a goal netted by Gomez.

But Leverkusen responded almost immediately when Kiessling latched onto a deep pass from Chilean midfielder Arturo Vidal and smashed his shot past Munich goalkeeper Hans-Jörg Butt after 14 minutes.

Kiessling was left frustrated moments later when he netted a second goal, only to see his effort ruled offside, but the replay showed the goal should have been counted.

There were few chances in the second-half as the game’s tempo dropped, but Gomez went agonisingly close in the dying stages with a back-heel flick that was thwarted by goalkeeper Adler.

Meanwhile Hamburg’s ambitions of joining Leverkusen at the top of the table suffered a rude shock when second-from-bottom Bochum poached a 1-0 win at the HSH Nordbank Arena after midfielder Dennis Grote hit the winner in the last 10 minutes.

The defeat leaves Hamburg fifth in the league while Bochum remains one off the bottom of the table.

On Saturday, Portuguese striker Hugo Almeida netted twice as Werder Bremen seized the lead – albeit temporarily – of the Bundesliga thanks to a victory over Freiburg.

Schalke 04 is third after a 2-0 win over grieving Hannover 96, which played its first game since goalkeeper Robert Enke committed suicide 11 days ago.

Bottom side Hertha was denied its first win since the opening day of the season when it drew 1-1 at Stuttgart.

Hoffenheim is fourth after a 4-0 win over Cologne with star striker Vedad Ibisevic scoring his second goal in two games with a 90th-minute penalty shot.

Defending champions Wolfsburg were beaten 3-2 at home by Nuremberg after Swiss striker Albert Bunjaku scored twice for the visitors before midfielder Peer Kluge hit the winner in injury time.

Mid-table Eintracht Frankfurt were beaten 2-1 by Borussia Mönchengladbach while Dortmund and Mainz laboured to a goalless draw on Saturday night.