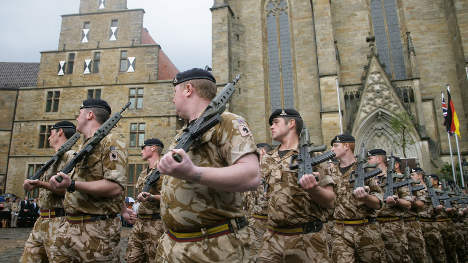 Defence spokesman for the party known as the Tories, Liam Fox, told the Daily Telegraph newspaper that other NATO allies could take over the role of continental defence and free up British forces for operations outside Europe, such as the war in Afghanistan.

Opinion polls put the Conservatives, led by David Cameron, on course to oust Prime Minister Gordon Brown’s Labour party in an election which must be held by next June.

“If other countries are willing to take up roles in continental defence, that leaves Britain and France able to take on expeditionary roles,” Fox said.

“Finding a more creative diplomatic solution in NATO will be a priority for an incoming Conservative government… it’s more important that we have more effective burden sharing so we can be freed up from some responsibilities.”

Calls for NATO allies to step up their contributions to operations in Afghanistan, where Britain has 9,000 troops in the second largest deployment after the United States, have caused tension within the alliance.

Fox said: “We need to be clear that there are constitutional and political reasons why some NATO countries will not be able to do the same amount when it comes to expeditionary warfare.

“We can either hammer on about burden sharing, or we can start looking at what countries will be able to do within their political, constitutional and military constraints.

“Far better in NATO that countries have roles which they are 100 percent willing to carry out.”

Britain has about 25,000 troops in Germany alongside US forces. They were initially stationed there to guarantee German security against the Soviets in the Cold War and retained in order to ensure NATO could respond quickly to events on the continent.