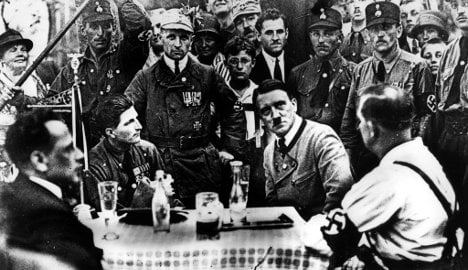 A file photo of Hitler in 1925 at an NSDAP meeting in Bavaria. Photo: DPA

The director of the Archives Nationales Isabelle Neuschwander told the paper that the report from 1924 was found in a safe that contains some of the institutions’ most important documents.

It refers to Hitler as “Adolphe Jacob,” who the French intelligence agents defined as a journalist due to activities at the NSDAP (Nazi Party) daily, the Völkischer Beobachter. Giving Hitler the incorrect name Jacob may have been due to a popular rumour at the time that said he had Jewish roots, the paper said.

The file also had the future German dictator’s date of birth and birthplace wrong, saying he was born nine years too early in 1880 in Passau, Germany instead of the Austrian town of Braunau am Inn.

Hitler was the head of the NSDAP when the A4-size record was made, and it refers to him as the “German Mussolini,” going on to say he “is not an idiot but (…) a very skillful demagogue.”

He was also said to have “failed miserably” at his attempted putsch on November 8, 1923 – an effort for which he served a jail sentence that provided time to write his book “Mein Kampf.”

Neuschwander said she did not know when the document was placed in the safe, where Napoleon Bonaparte’s last testament and constitutional documents from France’s different epochs are housed.

“This file is not worthy of remaining in the ‘Iron Closet,’ which should remain a place where only really prestigious pieces are preserved,” she told the paper, referring to the nickname of the main national archive building in Paris.

The document will soon be transferred to a more suitable archive, which holds some 6,600 documents on German history and the Franco-German relationship during the two world wars, she added.