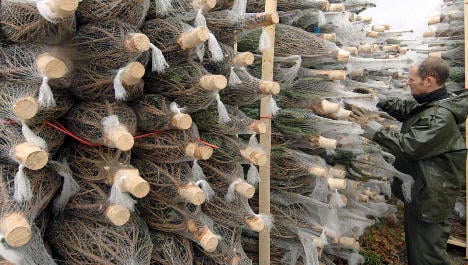 A survey released on Thursday showed that half of those asked said they would spend less money this holiday season than they did last year. Only 19.2 percent said they planned to spend more.

A third of those surveyed by Netbank and the Association for Consumer Research (GfK) said they planned to spend up to €200. Another third will spend up to €500 and a quarter said they will spend more. The survey also found that 25 percent of those asked plan on gifting money, which could come in handy considering the price of Christmas trees is on the rise this year.

Germans will have to dole out as much as 10 percent more than they did in 2008 for their beloved Tannenbaum. The Lower Saxon Farmer’s Association in Hannover said on Thursday that rising demand and short supply was likely to cause prices to surge this Christmas season.

Each year, more then 28 million Christmas trees are sold in Germany, but an increasing number of households buy two.

The 66 percent of Germans who plan on putting gifts under the tree will spend as much as €44 for a Nordmann Fir (Abies nordmanniana), the preferred tree in Germany. But those Yuletide cheapskates who want to save can get still get a two-metre spruce tree for as little as €16.