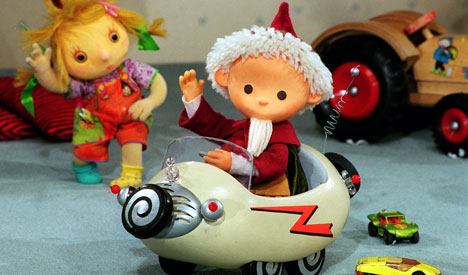 The communists beat the West with Sputnik and the first man in space, but they also won a race to televise a German cultural icon sporting a pointy hat, a white goatee and a bag of magic sleepy sand to help boys and girls have a good night.

On November 22, 1959, the Sandman flickered across East German televisions in black and white, pipping a capitalist competitor in West Berlin by a few weeks.

“At the end of the first episode, the Sandman himself was tired so he went to sleep in the snow and we had many children write letters and offered their own beds to him,” said Martina Wünsch, who works on the show for its current broadcaster, RBB.

After that first cold night, the show’s creators decided that Sandman should end every programme by returning home to his fairytale homeland.

Click here to see the Sandman through the years

After reunification in 1990, many expected that the East German Sandman would fade away. But his fans were able to keep the show going and the eastern version of the character created by puppet maker Gerhard Behrendt has since even supplanted his western counterpart.

“The massive protests from viewers of all ages was what led to the programme to continue airing uninterrupted,” Wünsch said. “The stories are now watched from the Baltic Sea to the Alps.”

In fact, there have only been three evenings since 1959 where children had to go to bed without their nightly Sandman story. The show was kept off the air twice when leaders of communist East Germany died and the third time was this past September, when RBB aired its marathon documentary “24 Hours Berlin.”

And 50 years after the show started, the mute doll featured in stop-motion animation shorts is as popular as ever.

More than 1.5 million German households tune in to the Sandman’s bedtime stories each evening. Some 10,000 letters, packages and, being the modern man he is today, e-mails are received every year from viewers around the world, asking questions like “Can I visit you?” and “What is the Sandman’s favourite cake?”

RBB estimates that the Sandman has delivered 18 billion sweet dreams over thousands of episodes since 1959. The 24-centimetre doll’s 50th year will be celebrated with a 90-minute long episode starting at 8:15 pm, which will include a visit from his friend, the former East German cosmonaut Sigmund Jähn, who took the Sandman into space 1978.

At the Sandman museum in Potsdam, where the programme is currently produced at the famous Babelsburg film park, the “longest Sandman picture in the world” is also on display, made up of more than 10,000 fan-drawn pictures.

Despite his age, the Sandman’s adventures aren’t over yet. Wünsch says that on November 27, the Sandman will drive his first combine harvester. And in early January, German tots can tune in to see their favourite storyteller use a snowblower in order to visit a family in the Black Forest.

And to think he’s managed all that with unblinking eyes and no mouth.