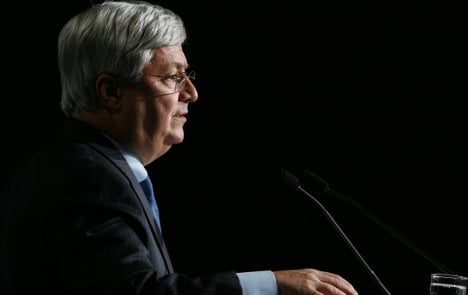 Klaus-Peter Müller, chairman of the supervisory board of Commerzbank – Germany’s second-largest bank – and president of the Association of German Banks, reserved particular disdain for the big banks in the US and Britain, and urged Europe not to go down the same path.

“I really have no sympathy when they say there are big problems with curbing the excessive bonuses of investment bankers,” said Müller, who also heads the German government’s corporate governance commission.

“Worldwide, there are about 10 big investment banks. Why can’t they agree to pay no more excessive salaries?”

He urged his colleagues to think very hard about how much money their skills were really worth.

“Inflated egos are an attitude that a society sooner or later destroys.”

Overpaid workers in the banking sector were “primarily an Anglo-Saxon problem” he said.

He called on Europeans to steer clear of this undesirable trend, saying he was “hoping for a healthy new European self-confidence” on the issue.

Müller’s strong criticism comes at a time when bonuses totalling billions are once again the order of the day, despite the backlash in the wake of the global financial crisis. The three biggest US investment banks, Goldman Sachs, Morgan Stanley und J.P. Morgan, are alone planning for bonuses totalling about €20 billion in 2009.

In Germany, Deutsche Bank is considered the major culprit, setting aside €1.3 billion for its 14,000 investment bankers in the third quarter of this year – more than double what it paid in the same period last year.

Commerzbank recently announced a plan to curb its own bonuses. Executive pay is limited to €500,000 as part of restrictions placed on the bank by the bank rescue fund SoFFin in exchange for an €18 billion bailout.

Political leaders are likely to pay attention to Müller’s call.

Finance Minister Wolfgang Schäuble has told business magazine Wirtschaftswoche that banks “ought to be strengthening their capital resources” rather than paying out huge bonuses.

At a G20 meeting in April, leaders of the most powerful nations discussed the possibility of restricting compensation that rewards short term risk-taking.