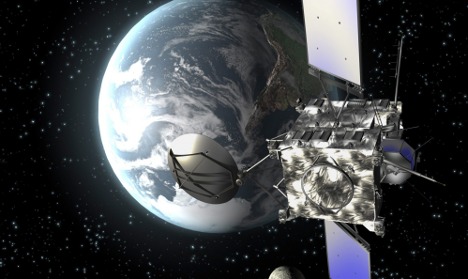 The 100-kilogramme “Rosetta” probe made its third and last swing around Earth, gathering momentum and using gravity as a slingshot to power its 10-year journey through the solar system.

The spacecraft accelerated 13,000 kilometres an hour by flying only 2,481 kilometres above Earth’s surface as it passed over the Indonesian island of Java, ESA announced in Paris on Friday morning.

By July 2010, the probe will have reached a speed of 61,000 kilometres per hour when it passes close to the asteroid 21 Lutetia and takes photographs.

It will then remain dormant to conserve power until it meets its true target, the comet 67P/ Tschurjumow-Gerasimenko, more than 480 million kilometres from Earth, in 2014.

Following the rendezvous, a detachable lander named Philae will break off Rosetta and fix itself to the surface of the comet to beam data from complex instruments back to Earth.

The probe will accompany the comet as it drifts in towards the sun, exploring it thoroughly over a period of up to two years.

Comets are debris left over from the formation of the solar system, when a cloud of gas collapsed under its own gravity and formed a swirling disc that eventually coagulated into the sun and the planets.

The Rosetta is an ESA project but the main spacecraft contractor is Astrium Germany, a subsidiary of aerospace gait EADS. Thirteen of the spacecraft’s 21 instruments come from German universities, the Max Planck Institute or the DLR German Aerospace Centre.

In total, the project will cost about €1 billion.