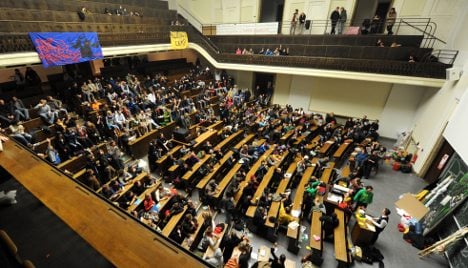 “The students need a clear signal that the corrections that have been decided are being incorporated into the academic system,” Schavan told broadcaster Südwestrundfunk, adding that new degree courses needed “streamlined.”

Schavan’s comments followed the most recent student protest on Wednesday night at the Ludwig Maximilian University of Munich, where students occupied a lecture hall to demand changes to educational policy.

“No one can force an academic reform against the will of the students,” a statement from the Munich students said. “Therefore we call for rights of co-determination for all decision-making processes that affect studies at the university.”

Similar protests are ongoing at some 20 other German universities. They began last week as a show of solidarity for their Austrian counterparts, who have also staged protests in recent weeks.

The Bologna reforms, which introduced bachelor and masters programmes to Europe, are meant to be completed in Germany by 2010, but many students say they force a focus on professional training to the detriment of scholarly learning.