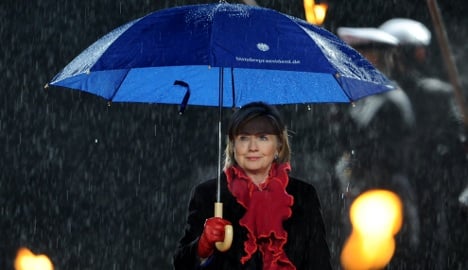 “We hope that Germany will be there, because it is in all of our interests for security,” she told broadcaster MDR info in an interview, adding that the world must prevent Afghanistan from becoming a haven for terrorists.

But Clinton said that this was up to the German people and their government.

She also acknowledged the contribution already made by Germany in Afghanistan.

“Germany has not only sent troops – and had to accept losses and victims among these troops – Germany has also provided civil and financial support,” Clinton said.

But she added that currently the main task in the country is containing the conflict, not economic or social advancement.

“We would also like to have that, but that’s not why we’ve sent in American troops. Our big task is to accelerate the training of Afghan security forces,” she said, adding that Germany has the experience and expertise to do so.

Germany has around 4,400 troops in an increasingly unpopular NATO mission in Afghanistan facing an ever more tenacious insurgency. The German government will likely extend a 4,500-troop cap in December, though last week head of the DBwV German Military Association Ulrich Kirsch discouraged the move, suggesting making changes in strategy instead.

Clinton spoke to the broadcaster on the tail end of her trip to Germany to celebrate the 20th anniversary of the fall of the Berlin Wall on Monday.