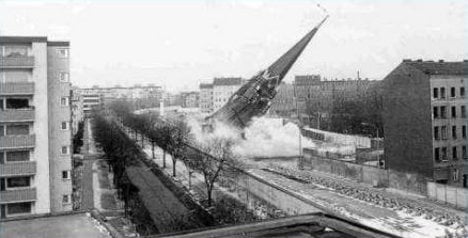 Pastor Manfred Fischer moved from Frankfurt to Berlin in 1975, arriving in a city long adapted to its Cold War division. His parish was blocked off from the Church of Reconciliation, located inside the Wall’s death strip along Bernauer Strasse. In 1985, the East German authorities demolished the house of worship during an expansion of the border security zone. Pastor Fischer saw the church come down, but just a few years later saw the Wall come down too. Today he still serves his community and parish at a rebuilt modern chapel on the church’s original site located near Berlin’s main Wall memorial and documentation centre. Anna Croall spoke with him about the significance of the events surrounding November 9, 1989.

You directly experienced the brutality of Berlin’s division with the demolition of the Church of Reconciliation. Did you, at any point, have a sense before November 1989 that things would change so dramatically?

Living in the West, my experience was, of course, very different to that in the East. For us in the West, changing times were sensed through the media. We saw television reports from Hungary, and other parts of Eastern Europe in the run up to 1989. But coverage from East Germany itself lagged behind. We were still wrapped up in the daily grind – which can be especially consuming for a pastor.

So you didn’t get a sense what was coming?

I did and I remember it well – it was in June 1989. We were holding a conference of the Protestant Church (EKD) in Berlin. Thousands of people attended some of them. During the conference, we had a feeling that things couldn’t stay as they were. This inflated West Berlin, with money pouring into the city, couldn’t last.

How did you feel, then, when the Wall actually came down?

I didn’t go over to the other side. I watched the border from a tower on Chausseestrasse, counting the people going over and trying to register their names. The next morning I wanted to talk to the police in the West, and check who had gone over, and whether they were coming back.

It was so important that they could come back – everything depended on whether there would be force used again. It seemed to become clear that the dynamic was so strong it couldn’t be stopped this time – but weakness so often leads to aggression. My worry was that the authorities would hit back twice as hard this time.

After a while, when it appeared violence would not be used, did you turn to celebration?

I was still worried, but I also felt this overwhelming happiness, the happiness that brought people onto the streets with champagne.

But the whole time, my head ticked over with worries of military reaction, and then worries for the economy. The political and economic system was turned on its head, without any preparation or warning.

How long was it before you were convinced things had calmed down, on all fronts?

It was after the election on 18th March, 1990 in East Germany. I knew then that something big had changed, five months on from the fall of the Wall, and that things could progress peacefully.

Organising a whole new country in a year was crazy. But special situations call for special capabilities, and I was proud of my country – on both sides, we rose to the challenge.

Now, twenty years on, there’s a whole generation coming to adulthood who’ve grown up in a unified Germany, and a unified Berlin. How should the years of division and the fall of the Wall be remembered now?

The fall of the Berlin wall Was an international sensation. Our memorial to the Wall, and memorials like it, can provoke discussion. It should be an encouragement to the youth of the world, but show that such things have happened, can happen and could happen again.

For those now growing up in a dictatorship, or in a country that oppresses individuals, they must first think outside of their situation, think that there could be an alternative. Remember how it went with the Wall – it could only fall in reality once it had fallen in our minds.

But we must also remember that the way it went for us in 1989 is not the way it always goes. The fall of our Wall was managed by both sides, led by the people, without party factionalism. I wish such peaceful management was possible all over the world.