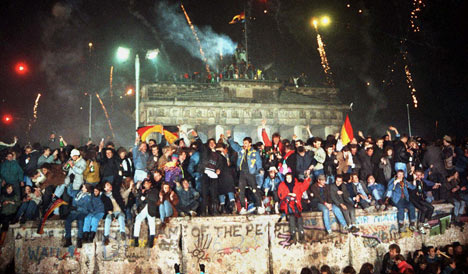 It’s easy to overlook how beautiful the mundane can be when remembering the historic events of November 9, 1989.

But this weekend I made a short trip from Berlin to the eastern German state of Saxony that would have been impossible 20 years ago.

My train ride took me through pleasant countryside on a golden autumn afternoon, but it wasn’t exactly the “blossoming landscapes” that former Chancellor Helmut Kohl so infamously promised amid the euphoria of German reunification.

In 2009, many of the eastern towns and villages I passed through face serious socioeconomic problems including high unemployment and a dramatic demographic decline. But even a superficial glance out the train window confirmed the eastern half of Germany is still light-years from where it was on that night in November when the Wall crumbled.

With its modern infrastructure, rebuilt cities and environment unpoisoned by industrial filth, the region is no longer condemned to become Germany’s Mezzogiorno. It’s undoubtedly taken a huge effort and an equally large amount of cash, but nobody (aside from Kohl) said undoing 40 years of communist economic mismanagement would happen overnight.

Things have changed slowly, however. A study released last week by Cologne’s IW economic institute even forecast the most prosperous parts of the East are likely to overtake the poorest bits of the West in the next few years.

And what about those sceptics arguing there’s a mental wall still dividing Germans decades after the barbed wire and concrete disappeared?

Differences certainly remain between Ossis and Wessis, but the gulf that separates them in 2009 is in many ways no greater than the one between people from northern and southern Germany.

Those who would deny an Ossi identity conveniently overlook the fact that Germany has always been a place of strong regional variety – just put someone from Hamburg in a room full of Bavarians to see what I mean.

Far more important is that Teutons of all shapes and sizes are anchored at the heart of a democratic and peaceful continent. Without German reunification, the eastward expansion of the European Union would be unthinkable.

Nor would I have likely attended the birthday party of a spritely 80-year-old lady in Saxony this weekend. She’s lived through war and fascism, oppression and communism, as well as the upheaval of 1989’s peaceful revolution. There was cake, plenty of beer, and a small-time magician, who conjured a ridiculously large white rabbit from thin air.

Two decades after the fall of the Berlin Wall, the magic of November 9 has inexorably faded. But eastern Germany has become a gloriously normal place in the meantime.