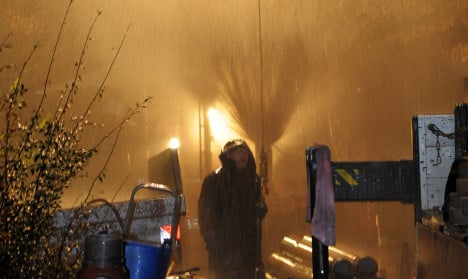 Drilling was underway in the city centre next to the Hessian state Finance Ministry on Thursday and had reached a depth of 130 metres when water began shooting out of the hole.

“There was 6,000 litres of water coming out per minute,” city spokesperson Siggi Schneider told news agency DPA. “The holes are also difficult to close.”

By midnight some 400 square metres surrounding the drill site were under water as 60 fire fighters worked to pump the 15-degree Celsius water into canals and prevent the Finance Ministry and a nearby hotel from flooding. The city had to call geologists and other experts to the scene to help determine what could have caused the fountain, which sprayed as high as 7-metres at one point during the evening.

“While the hole could be filled with cement in the early morning hours, the water flow could not really be stopped,” Finance Ministry manager Karlheinz Weimar told DPA, explaining that the murky water had begun to emerge from the ground in other places.

City officials said they could not yet estimate damages caused by the flooding.

The workers had been testing for the geothermal source to heat a new “passive house,” or ultra-low energy building, for the ministry. The drilling had been considered low-risk.