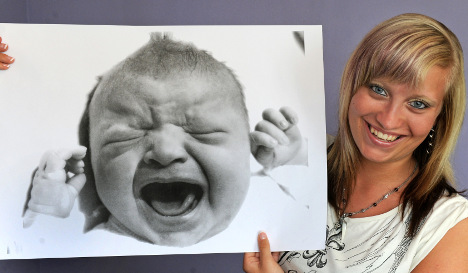 “Actually my life’s really normal – except that every year photographers and television cameras turn up for me,” said the 19-year-old.

Klier lives with her mother in Borsdorf near Leipzig, where she carries her title with humour.

“Day to day, it’s not an issue at all,” she explains. “We laugh about it. Sometimes there are a few comments from friends, but actually it’s worn a bit thin.”

Germany officially reunified on October 3, 1990. As it happens, it was an accident that Klier wound up as the “last cry of the GDR.”

“A photographer was there in the hospital and wanted to photograph the first unification baby,” said Klier.

But Klier had arrived just a little too early.

“So a midwife said to the photographer: ‘Take the last GDR baby instead.’ The photos went around half the world.”

Her family received mail from across the globe, from France to Africa, all of which the family has safely tucked in an album.

“When visitors come, sometimes we flick through them,” she said.

But the fact that she sometimes gets inquiries from people asking her to explain the German Democratic Republic, leaves her a bit perplexed.

“I grew up in Germany,” she said. “Of course I’ve learned the history and I know what my mother or relatives say. But I personally have no connection with the GDR.”

Nor does she have any interest in the interminable “Ossi” and “Wessi” prejudices.

She also said her Saxon roots were not everything.

“These days you have to be flexible. I’m just as much cosmopolitan,” she said.

At the moment she is awaiting a place at university to study tourism management. Her university entrance score wasn’t quite enough to assure a place in the competitive field.

“Now I’m going to do a foreign internship in the Dominican Republic,” she explained.