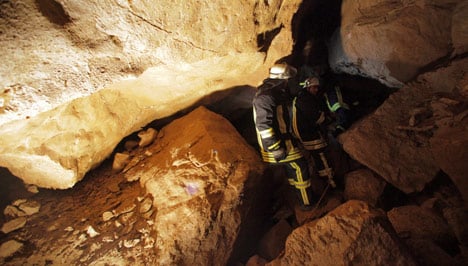 The 46-year-old was hospitalized for observation, but is believed to be in good condition after his ordeal.

About 100 rescue workers worked to free the man after he was shut into the cave near Breitscheid-Erdbach by falling rocks. He had been conducting stalactite research with three other experts when the slide occurred in the Herbstlabyrinth, the state’s largest cave.

The rescuers, who travelled from the states of Bavaria and Thuringia, were finally able to loosen a stone below the man, who was trapped at the hips around noon on Sunday. He was then able to free himself using his own strength, they reported.

An emergency worker attributed his survival to an “excellent physical and mental constitution.”

The man was in contact with rescuers during the entire operation, at one point receiving an injection to prevent him from becoming hypothermic.

The Herbstlabyrinth was discovered in 2003.