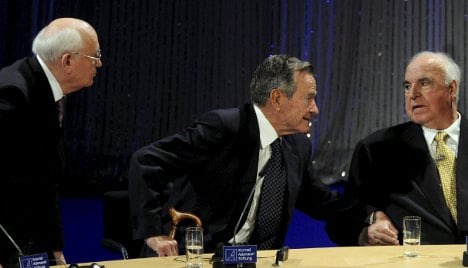 “Mikhail Gorbachev and George Bush were Germany’s most important partners,” said Kohl, 79, who has been wheelchair-bound since fracturing his hip in February 2008.

“There has never been a relationship that reached the level of my relations with these two gentlemen,” he said.

The “chancellor of reunification,” who speaks with difficulty after a stroke left his lower face partially paralysed, saluted Bush as someone to call if you wanted cheering up.

“If you were in a bad mood, you just had to pick up the telephone and call George Bush…. I can assure you that he’d put you in a good mood,” he said, to rapturous laughter from the 1,800 people present.

Major celebrations are planned for November 9, marking two decades since the Berlin Wall came down, heralding the collapse of Soviet communism and the reunification of Germany.

Saluting his “former colleagues,” Bush, 85, who also has difficulty moving since a hip operation in 2007, hailed Kohl as “truly a great statesman of the 20th century — he was a rock, solid!”

“Nevertheless, the events of ’89 were not set in motion in Bonn, Moscow or Washington, but in the hearts and minds of the people deprived for too long of their God-given rights,” Bush said.

Gorbachev, 78, remembered two leaders who were absent, whose countries occupied West Berlin along with the United States: former British Prime Minister Margaret Thatcher, 84 and suffering from Alzheimer’s, and former French president Francois Mitterand, who died in 1996.

“Thatcher and Mitterand and myself, we defended the position that there needed to be two Germanys,” Gorbachev said. “I’m sorry, Helmut. We didn’t have good relations at the start.”

Recently declassified documents have shown that Britain was hostile to, and France worried about Germany’s reunification.

A “Festival of Freedom” is being organised for November 9, during which Merkel will receive guests including Gorbachev, Polish former anti-communist leader Lech Walesa, and British Prime Minister Gordon Brown.

French and Russian presidents Nicolas Sarkozy and Dmitry Medvedev will also attend, while US President Barack Obama will be represented by his Secretary of State Hillary Clinton.