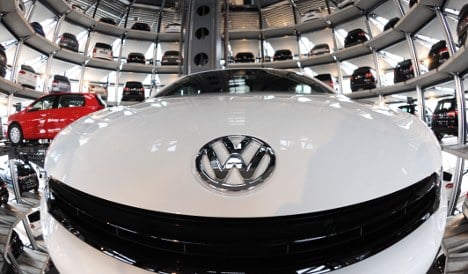 The results were nonetheless slightly better then expected, beating analyst forecasts compiled by Dow Jones Newswires for an 88 percent drop in net profit.

“The Volkswagen group’s earnings were impacted by the global financial and economic crisis in the first nine months” of the year, VW chairman Martin Winterkorn said in a statement.

VW reiterated its full-year outlook, saying it “continues to expect that it will be unable to reach the level of earnings it achieved in previous years, although the group will close 2009 with a profit.”

Looking ahead, Winterkorn said “the trend in the automotive industry means that there is no reason for premature optimism. The business climate remains tough.”

VW forecast that “of the world’s major economies, only China and India are likely to record positive growth” this year. China, the statement noted, was now VW’s largest market, accounting for more than one in five of all vehicles sold. Nine-month sales there jumped 37 percent.

Overall, VW improved its share of the global auto market to 11.7 percent from 10 percent, the statement said.

The group has recently acquired its 10th brand, the luxury sports car maker Porsche, and is believed to be considering the purchase of up to two more.

“The Volkswagen Group is holding its own extremely well despite the adverse conditions,” Winterkorn noted.

“While the global market is contracting by 12 percent, we are recording stable delivery levels.”

But the car maker has not escaped the global auto crisis and net profit for the period from January to September fell by 82.5 percent to €655 million, missing an average forecast of analysts polled by Dow Jones Newswires of €701 million.

Sales in the nine-month period slipped 9.7 percent to €77.2 billion, while operating profit dropped to €1.5 billion from €4.92 billion.

Investors did not approve and VW shares slipped 0.43 percent to €109.69 in midday trading, while the Frankfurt DAX index of German blue-chips was 0.15 percent higher overall.