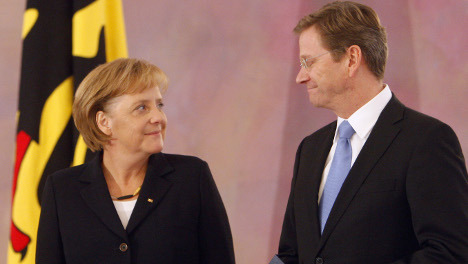 Angie and Guido after being sworn in on Wednesday. Photo: DPA

Following her general election victory on September 27, a majority of German lawmakers in the lower house of parliament, the Bundestag, voted to keep Merkel chancellor, with 323 in favour, 285 against and four abstentions.

“I accept the result and thank you for your trust,” she said, as lawmakers applauded and presented her with bouquets of flowers in the main chamber of the Reichstag parliament building.

Merkel, now 55, became Germany’s first female chancellor in 2005 as well as its first leader from the former communist East Germany, and its youngest.

Click here for an introduction to Merkel’s new cabinet.

The new government has pledged to make Germany, accounting for a third of eurozone output, emerge from the global downturn in better shape than before

the financial crisis sent it into its worst recession since World War II.

It has promised €24 billion ($35.6 billion) worth of tax cuts, something that will push Germany’s mammoth national debt still higher and put it in breach of European Union deficit rules for several years to come. Merkel has ruled out large reductions in government spending, however, saying this could jeopardise Germany’s fragile recovery, and that the economic growth that the tax cuts will trigger will eventually help cover the cost.

Other policy aims include reforms to Germany’s creaking health care system, although the details have yet to be hammered out.

Germany, one of the world’s biggest exporters, has been hit harder than many advanced economies by the global downturn, with output set to contract by around five percent this year.

“In such a unique economic crisis the state must do the little that it can do to boost growth, financed by higher debts,” Wolfgang Schäuble, Merkel’s new finance minister, told Stern magazine on Wednesday.

“First what we have to do is to make it through the crisis – afterwards we can consolidate,” Schäuble said.

Economists are sceptical that the tax cuts will do much to boost domestic consumption, the weak point of the German economy, although many agree that

Merkel has little choice in the current circumstances.

The economy is not the only challenge facing Merkel in her second term.

Figuring highly will be Germany’s increasingly unpopular mission in Afghanistan, with its about 4,400 troops based there facing an ever more tenacious insurgency and Berlin under pressure from its allies to do more.

The chancellor’s first foreign trip in her new term was due to take her to Paris later on Wednesday for talks over dinner with French President Nicolas Sarkozy.

Next Tuesday, Merkel is due to become the first German chancellor since Konrad Adenauer, West Germany’s first post-war leader, to address both houses of the US Congress.