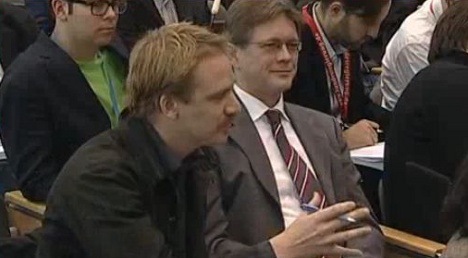 Photo: A screenshot of the video.

The video, already viewed a quarter of million times on YouTube, shows Rob Savelberg, Berlin correspondent for daily newspaper De Telegraaf, at a press conference this weekend where Merkel presented the details of the coalition agreement between her conservative Christian Democrats (CDU) and the pro-business Free Democrats (FDP).

After Merkel confirmed that Wolfgang Schäuble would switch from the Interior Ministry to the Finance Ministry, Savelberg had an uncomfortable question for her: how could he be trusted to handle the finances of 82 million Germans if he once misplaced an illegal cash donation now worth €50,000 from the disgraced and imprisoned arms dealer Karlheinz Schreiber?

Visibly unsettled, Merkel manages at first to mumble only that she has faith in Schäuble, who was forced to step down as the leader of the CDU ten years ago because of his role in a massive political slush-fund scandal surrounding former Chancellor Helmut Kohl.

But Savelberg refuses to be placated by her answer and to widespread laughter asks: “How can he handle money if he forgets about 100,000 in cash in his desk?”

The chancellor then replies she won’t say anymore on the matter before nodding with a thin-lipped smile in the Dutch reporter’s direction while Merkel’s coalition partners, FDP leader Guido Westerwelle and Horst Seehofer from the CDU’s Bavarian CSU allies, look on in bemusement.

Ironically, Merkel and everyone at the press conference was aware that she owes her present position to Schäuble’s downfall a decade ago – possibly one reason he was politically rehabilitated four years ago, when he became her interior minister.