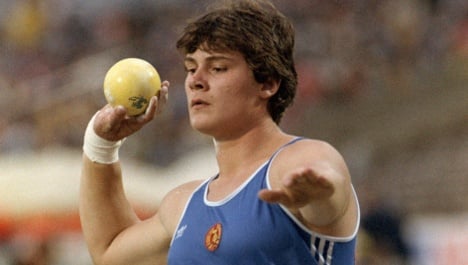 Crowned European shot put champion in 1986, Heidi Krieger was one of the stars of the former GDR. But after being subjected to a doping program like thousands of other former East German athletes, Krieger realised on her 1990 retirement that the effects of testosterone hormone abuse had left her with all the traits of a man.

She opted for a sex change operation and is today known as Andreas. Her birth certificate has been altered and, sporting a moustache, she is now a he who owns an army clothing shop in Magdeburg.

The confident, strapping man of 1.87 metres shows a copy of his photo from his competition days as Heidi, and a timid girl stares out from the image with short brown hair and broad shoulders hidden in a tracksuit.

“I don’t know if I would have remained as a woman, because my problems were already there, but they stole my story from me,” the 44-year-old told AFP. “I never had the possibility of saying: I do not want to take hormones. I was barely 16 years old when my coach first gave me those blue pills.”

During the 20-year period the GDR competed as a separate state, the tiny country of 16 million people won 519 medals at 11 Olympic games – 192 of which were gold.

To achieve this success, the East German state ensured their athletes had the best available facilities and equipment, coaching and medical back-up, psychological testing and dietary supplements.

But it was the scale of state-sponsored doping – known as State Plan 14.25 – that set East Germany apart and was only brought to an end after the collapse of communism when the Berlin wall came down 20 years ago.

It is estimated some 10,000 athletes were part of the doping program which even involved the Stasi, the state’s secret police service, to make sure athletes took Turinabol, an anabolic steroid which encourages muscle growth.

Each athlete was on an index of prescribed hormones and the small country from behind the iron curtain became a medal factory.

The GDR finished second in the medals table of several Olympic Games including Montreal 1976, Moscow 1980 and Seoul 1988.

At the European Athletics Championships in 1986 held in Stuttgart, Heidi Krieger won gold in the shot put and Andreas still has the telegram of congratulations sent to him by GDR leader Erich Honecker addressed to “My dear friend of sport.”

But the anger still burns.

“At that time, I felt increasingly foreign in my own body,” he says, having opted for a sex change operation 12 years ago. “I officially became a man and I obtained a new birth certificate.”

As Andreas empties a plastic bag full of medals onto the counter in his clothes shop which he won as a woman, only the gold medal from Stuttgart is missing – he donated it to the association of the GDR’s doping victims.

“That medal doesn’t mean anything to me now,” he said.

Andreas is now married to a former GDR swimmer and is one of the rare athletes to have spoken out against doping while others prefer to stay silent through fear their achievements will be tarnished.

But the after-effects of large-scale doping are only coming to light now with the victims suffering from a host of disorders including cancer and sterility.

“I still carry plenty of anger in me now,” confessed Krieger. “After the wall came down, West Germany simply took the knowledge from the trainers in the old GDR. These East German coaches knew how to manufacture champions, they are still producing medal winners today. Medals count more than morals.”