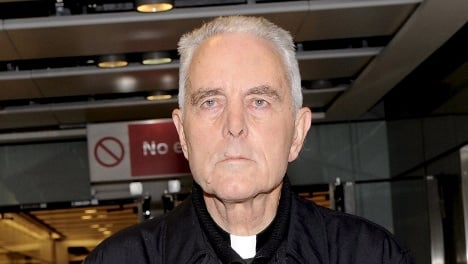 The court in the Bavarian city of Regensburg sent notice to German lawyer Matthias Loßmann to say it was fining Williamson for incitement over his claim on Swedish television that fewer than 300,000 Jews died in Nazi death camps.

Loßmann told The Local that the court was giving Williamson the option to pay the fine or take the case further, which will mean facing trial.

“We just got the notice today, so it’s a bit early to say what case we will make, but I think we are going to fight it,” he said.

The exact fine would depend on Williamson’s income. He would need to pay 120 times his daily income, up to €12,000.

Williamson has two weeks to make his appeal.

Williamson, who is a member of an ultraconservative Society of St. Pius X, claimed a year ago the Nazis didn’t murder Jews in gas chambers and that only 200,000 to 300,000 Jewish people had been killed in concentration camps.

Because he made his comments to Swedish television while at a Pius brotherhood seminary in Zaitzkofen, Bavaria, he was liable for prosecution in Germany, where Holocaust-denial is outlawed.

Williamson has previously said he did not intend for the interview to be broadcast in Germany and had specifically asked the Swedish producers not to post it on the internet, though the producers deny this.