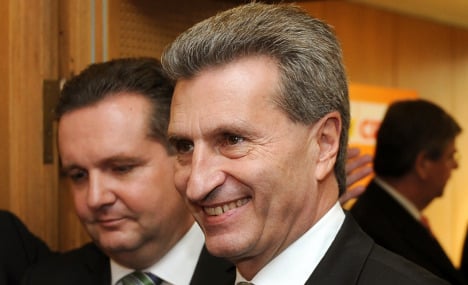 The party’s executive committee in the southwestern state chose Mappus unanimously in a “crystal clear” decision, the CDU’s state secretary, Thomas Strobl, said after a meeting in Stuttgart.

He is now set to replace Oettinger, who has been named by Chancellor Angela Merkel as her choice to succeed Günter Verheugen as Germany’s EU commissioner in Brussels.

However Oettinger’s selection is proving controversial, with critics on all sides claiming he does not have the necessary European experience and may face a tough confirmation hearing. Like all commissioners, he will need to be approved by the European Parliament.

“In contrast to other CDU politicians in Brussels and Berlin, Oettinger has so far not stood out on European questions. The hearing will be a difficult thing for him,” said the centre-left Social Democrats’ Martin Schulz, who leads the second biggest parliamentary group in the European Parliament.

Even EU President Jose Manuel Barroso has reportedly questioned the appointment, asking German European parliamentarians, “What is that supposed to be?” according to the Kölner Stadt-Anzeiger.

Oettinger himself expressed confidence that he was up to the task, saying he wanted to put economic issues at the forefront. His predecessor Verheugen is the Commissioner for Enterprise and Industry.

“The huge issue of the economy is important for Germany. Everything else revolves around it,” he told the Hamburger Abendblatt.

“Our industry, our middle class, our small business and our professionals have an interest in being represented by our EU Commissioner,” he said.

Chancellor Angela Merkel had offered him the job last Thursday because “she has faith in my economic competence,” he added.

In Baden-Württemberg, Education Minister Helmut Rau urged that Mappus should also become party chairman in the state, saying that the party had “good experience” of the two positions being held by the same person and adding that this was no time to “experiment.”