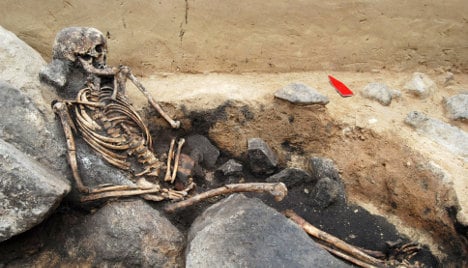 The Unetice culture burial of a sitting woman found in Saxony-Anhalt. Photo: DPA

The eastern German state’s office of archaeology announced this week that Deutsche Bahn’s construction of a new Intercity-Express (ICE) train route between Erfurt and Leipzig has proven to be a bonanza for a team of 150 experts, who have been working since September 2008 to examine some 75 hectares across the Querfurt plate near Oechlitz.

The fertile region between two valleys is known to have been settled for at least 7,500 years along what was an important trade route, but the Deutsche Bahn project was a special opportunity to explore the evidence below ground, Dr. Alfred Reichenberger from the state’s archaeology authority told The Local on Tuesday.

“The amazing thing is routes such as this naturally occur without considering what’s beneath, it’s a random test trench through the landscape that functions like the laws of probability,” he said. “And we can make strong conclusions from something like this. Especially in a region where hardly any archaeological digs have taken place.”

Among the artefacts uncovered at more than 15 sites in the area are evidence of settlement and graves – some of which were used repeatedly over the years.

Click here for a photo gallery of the dig.

Near Bad Lauchstädt archaeologists found a farm from the Unetice culture

they dated back to between 2200 and 1600 BC. A small grave nearby revealed a woman buried in a sitting position – which the state authority said could only be explained after further analysis.

The oldest artefacts pulled up at the dig are 7,300-year-old objects from the Linear Pottery culture, considered to be the oldest farming culture in central Europe.

Meanwhile Reichenberger reported that the digs also revealed the largest number of gravesites from the so-called Bell-Beaker culture (2800-1900 BC) ever found.

“At the end we will have a very good settlement history of this area across antiquity. It shows regularities in where the settlements were, where the burial sites were, and their changes as time went on,” Reichenberger said, adding that the project is currently among the largest archaeological digs in Germany.

The state archaeology team still has 25 hectares of ground to examine before the project ends in mid-2010. Inventory and documentation of the finds is estimated to last until early 2011.