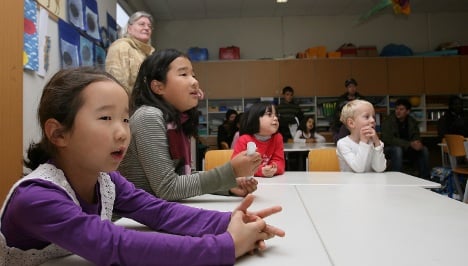 During an open-house introduction on Thursday, organisers at the Gustav-Falke elementary school explained that the model class with top-level facilities will only be open to children who pass a German proficiency test.

School director Karin Müller is actively recruiting students from Berlin’s posh Mitte district – just a few blocks away from the school, but miles away from Wedding’s struggles with integration. At first parents resisted the idea for fear of alienating other students with an “elite class,” but she says interest is growing.

Wedding parents agree that the more German-speaking students who attend the school, the better, she said.

The class will have between 24 and 28 students – half of whom must have a German-language background.

“It won’t be an elite class,” Müller said, adding that the other classes will also soon take part in group projects with the “German guarantee” kids.

The city’s education administration has welcomed the idea, and Mayor Klaus Wowereit called it a “trendsetting initiative.” Nearby schools are also said to be considering similar programmes after the state parents’ committee recommended the concept in multicultural neighbourhoods labouring to help children successfully integrate.

But “German guarantee” programme at Gustav-Falke will only launch if enough students enroll in November.