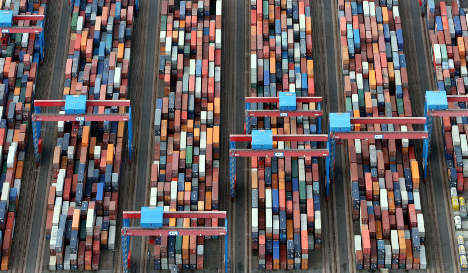 Output in 2010 should reach 1.2 percent, the group of institutes said in a closely-watched joint report, strongly revising up a previous projection of minus 0.5 percent made in April.

“In the autumn of 2009, the lowest point of the worst global recession since World War II appears to be behind us. Much points to an economic recovery,” the institutes said in a joint statement.

Greater stability on global financial markets, a brighter outlook for world trade and a rebound in Asia will likely help Germany, one of the world’s leading exporters, recover relatively quickly from its slump, the report said.

The report came the day before the government is due to present its own economic forecasts, in which it too is expected to revise up its view following a strong bounce in Germany’s economic fortunes.

Nevertheless, this year is still set to be the worst in Germany’s post-war economic history, with a contraction in output of 5.0 percent, the institutes said.

Unemployment this year will reach 8.0 percent, rising to 9.4 percent next year, they added, with just over four million Germans unemployed on average in 2010. However, the jobless lines are considerably shorter than economists had feared in the midst of the slump in output. In April, the institutes predicted just under five million unemployed in 2010.

Chancellor Angela Merkel, who hopes to form a government with her new pro-business coalition partners by October 23, said Wednesday the road ahead will be bumpy for Germany’s economy but a recovery is on track.

The new coalition is currently squabbling over tax cuts and changes to the tax system, as well as over health care reform. So far, only a deal on measures to help the long-term unemployed has emerged from lengthy negotiations. With the public coffers empty in the wake of the financial crisis, Merkel is wary of sweeping tax cuts.

The institutes’ report predicted a budget deficit of 3.2 percent of output in 2009 and 5.2 percent in 2010. The maximum permitted under European Union rules is three percent.

The economists also injected a note of caution into their broadly optimistic analysis, saying that although the economy would grow strongly in the third quarter of this year, there were plenty of obstacles facing Germany in the coming months.

“The present recovery will likely not be sustainable. There are many more significant headwinds standing in the way of a swift upturn,” the report said.

The institutes – Ifo in Munich, IfW in Kiel, RWI in Essen and IWH in Halle, together with the Austria think-tanks, WIFO and IHS and the Swiss KOF – publish their outlook twice a year.