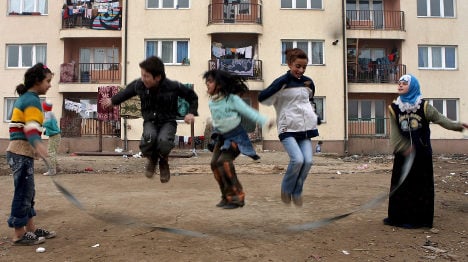 Children play at a Roma camp near Pristina. Photo: DPA

According to a parliamentary inquiry by the Left party into the matter, Berlin and Pristina plan to sign an agreement this autumn to send back the refugees, the paper said.

The agreement states that Kosovo must take all refugees back that can give proof they once lived in the disputed former Serbian territory. The Interior Ministry has apparently promised Kosovo to process 2,500 applications each year and maintain an “appropriate relationship to different ethnicities,” which implies they will not send only the persecuted Roma refugees home, the paper said.

Last year 900 Kosovar refugees returned to their homes from Germany.

The Left party’s Ulla Jelpke, who filed the inquiry, called the plans a “monstrous project,” adding that the Roma would face “daily alienation” in Kosovo, which has an ethnic Albanian majority.

Early this year the Office of the United Nations High Commissioner for Refugees (UNHCR) reported a serious threat of poverty and possible ethnic conflicts due to returning refugees and recommended only voluntary trips home.