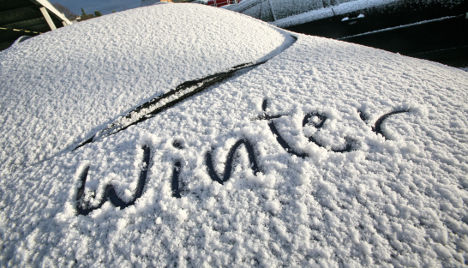 The huge accident occurred near Bobitz in northwestern Mecklenburg and forced the closure of the autobahn heading towards Lübeck, police reported. Five cars were involved in another wreck going the other direction, but authorities were able to divert traffic around it.

“It’s absolute chaos,” said a spokesman for the autobahn police in nearby Wismar.

He said the motorists, two of whom suffered minor injuries, were unprepared for the slippery driving conditions.

Early in the morning, the German Weather Service (DWD) had forecast that many parts of the country would see the first signs of winter on Tuesday, with the snowfall limit dropping to lower elevations.

Four centimetres of snow fell upon the Brocken, the highest mountain in northern Germany and the white stuff also covered the Fichtelberg in the state of Saxony.

Snow is also likely in the Alps and low mountain ranges in the south and east of the country as Arctic air sweeps through the country with frosty temperatures, the DWD said.

“During the day with highs of three to seven degrees Celsius, one will need a thick jacket, though gloves and hat are optional,” meteorologist Jens Hoffmann said from the DWD headquarters in Offenbach.

Current chilly temperatures will likely stick around until the weekend, but they won’t be cold enough to allow for heavy snowfall, he added.