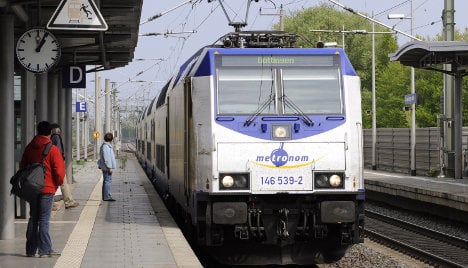 A Metronom train. They run only in Lower Saxony, Hamburg and Bremen. Photo: DPA

For reasons unknown, the 22-year-old student from the region of Oschersleben in Saxony-Anhalt, got stuck to the train while mooning the rail employee. He then fell between the train and the platform and was dragged along before quick-thinking passengers pulled the emergency brake.

In a statement, police said the man survived his “careless behaviour” with severe cuts and bruises.

He and his 23-year-old friend were travelling on a Metronom train from Hamburg to Bremen when the train inspector caught them smoking and travelling without tickets.

The female train attendant forced them to put out their cigarettes out and gave them the choice to buy tickets or get off the train at Lauenbrück train station. Several witnesses confirmed that the men got off the train.

In an apparent protest against the train staff, the 22-year-old pulled down his pants and pressed his bare buttocks against the window of the departing train.

For reasons the police have yet to determine, he was dragged along, fell between the train and the platform and wound up 150 metres past the platform.

“The man was extremely lucky that he was not run over,” the police statement said.

He was admitted to hospital with severe grazes, bruises and a blood alcohol level of .209 percent.

The inspector was treated for shock and sent home. Some 23 trains were delayed while the line was closed after the accident.

The man is expected to be charged with dangerous interference with rail traffic.